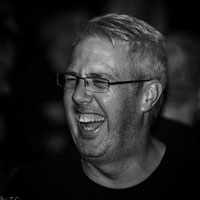 Jeff grew up in the 70’s in a country town and struggled to find his way with an alcoholic father and an obese type 2 diabetic mother. His parents divorced when he was 11 and battling to make ends meet, it was at age 15 that he sat down and wrote a suicide letter to his mother. Luckily he made it through this period and moved to Brisbane after finishing school. Jeff loved to talk which paved the way for a successful 25 year career in sales.

In February 2019 while training for a 1600 kilometre cancer charity bike ride in honour of his passed mentor Alan Maxwell, Jeff suffered and survived a heart attack and found himself asking 3 simple questions – Did I live, Did I love, Did I matter?

In March 2020 Jeff quit his well-paying, secure job and went into the field of coaching to spread the message of Gratitude, Empathy and Mindfulness.

He was a successful salesperson and sales manager, only ever working for 2 dealerships and finishing earlier this year after 11 years at Torque Toyota.